Maybe the prospect of Valentine’s Day has sent the nation’s gaming fans a little gooey, or perhaps it’s the chance to interact with some of literature’s most popular characters that they like so much. Whatever the reason behind the success of a new online game designed to highlight the attractions of Warwickshire to tourists, it’s clearly working.
The company behind the game ‘Romeo wherefore art thou’ claims that some 22 million users have now clicked on the site to try and help lovestruck Romeo gather flowers for Juliet, with the Bard himself making an appearance at the end of each level or ‘act’.

What’s in a game? Shakespeare Country’s online novelty in which players take on the role of Romeo has become an internet hit. Shakespeare Country, the tourism authority for the region that includes Stratford-upon-Avon, the birthplace of England’s most famous writer, hopes that the interest online will convert to actual visitors.

Phil Hackett, Chief Executive of Shakespeare Country, said: “It’s generated more than a quarter of a million unique visitors to our website every month and a percentage of people are now thinking the Shakespeare Country is an enjoyable and fun place to come and visit.”
He added that the game’s success was largely down to the fact it had gone ‘viral’, where users share web pages they like with friends and family.

In a bid to reach Juliet, Romeo must avoid wild boars and skeletons, presumably not often encountered by tourists visiting Shakespeare Country, collecting blooms and books along the way.

To play the game, visit www.shakespearegame.com

Shakespeare Country has launched a new viral online game entitled “Romeo – Wherefore Art Thou?”. The platform style game, which can be found at shakespearegame.com sees the player guide Romeo through a Shakespeare Country landscape to reach Juliet and rescue her from the balcony.

The game, designed by Koko Digital, aims to encourage players, their friends and family to visit Shakespeare Country and interact with elements of the brand. The game also aims to raise brand awareness as well as being used to capture data for Shakespeare Country.

Romeo and Juliet were chosen as being two of Shakespeare’s most iconic creations and ones that the vast majority of players associate with. The five Shakespeare Houses have been integrated into the game so showcasing some of the attractions people would see for real when visiting the area. The game has been based loosely on the Mario style platform concept which is extremely popular and one that the target audience is familiar with.

Players are also able to send the game onto friends by entering their e-mail address. A personalised email is then sent from the sender to the receiver with links to the game and a brief description. During the game, players are encouraged to visit the Shakespeare Country website through clickable logos and also direct references at the end of each level.

Phil Hackett, Chief Executive of Shakespeare Country stated “We are delighted to launch our new online game for Shakespeare Country. The concept allows players to interact with the brand and visit some of our most infamous attractions. The game is informative and fun to play showcasing our brand in a vibrant and engaging way”.

An online Shakespeare game based on Romeo and Juliet has become an internet hit, drawing in 22 million players worldwide. Published: 7:30AM GMT 05 Feb 2010

“Romeo wherefore art thou” sees web users take on the role of one of Shakespeare’s most famous characters, as he collects flowers for Juliet. As he travels through the streets of Stratford-upon-Avon, he tries to avoid a numbe of wild boars and skeletons.

Initially commissioned by Shakespeare Country tourist site, the game has become a surprise hit with a third of the amount of the UK’s population said to have played it. The aim is to collect enough roses for your sweetheart Juliet, and with Valentines Day drawing closer, is proving a fitting game for wannabe Romeo’s. The bard himself even appears in the game himself, telling Romeo to move on to the next level, or act.

Phil Hackett, Chief Executive of Shakespeare Country, said: “I wanted to do a viral campaign but only estimated about 2.5 million would play it. I think the programmers have done a great job. Although they are characters they are instantly recognisable and the environment has all the major landmarks – you get to pass the theatre, his birthplace and Anne Hathaway’s cottage. It really goes bring Shakespeare back to life.”

He added: “Since its launch last May it’s generated more than a quarter of a million unique visitors to our website every month and a percentage of people are now thinking the Shakespeare Country is an enjoyable and fun place to come and visit.”

He said the game had taken off mainly through viral marketing, from users passing on the link to friends and family, although some people had also come directly via the Shakespeare Country website too.

Stu Howarth, director of kokodigital who created the game, said: “It’s the most popular game we have ever made. We used Romeo as he is probably the most widely known Shakespeare character and the game is loosely set on Mario, which is accessible for everyone. We weren’t trying to reinvent the wheel – just make a fun attractive platform game that is the most accessible to the widest audience.”

Other Shakespeare organisations also welcomed the game, as a means of prompting the county. A spokesperson for the Royal Shakespeare Company said: “The idea behind the game is to entice people to come visit Shakespeare Country. So we think its a good idea. Although its not entirely representative of the way we perform the play, it’s a good hook to get people interested in Romeo and Juliet. Its proved very successful with 22 million people world wide playing the game – but I can’t imagine that many people visiting.”

The Shakespeare Country is a not for profit partnership between Stratford and Warwick district councils and the private sector.

Translation: Return on investment at a ratio of two thousand four hundred to one. Wouldn’t we all like to achieve such outstanding results from our marketing investments? Well this is the return achieved by the viral marketing campaign I created for Shakespeare Country, when I was their Chief Executive; in this article I am going to share with you the circumstances and the thinking behind this incredibly successful campaign.

The Campaign:‘Romeo Wherefore Art Thou?’ is an award winning viral game created during the darkest months of 2008 and 2009. The world-wide credit crunch was now a global financial crisis, social media and on-line marketing was overshadowing more traditional forms and every business was trying to maximise their marketing reach during the ensuing recession whilst also reducing their budgets and introducing cost saving practices. 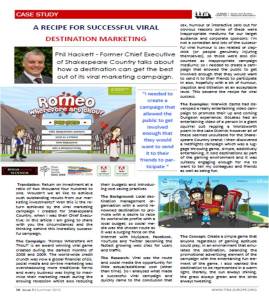 The Background: Local destination management organisation with a world renowned destination to promote with a desire to raise its world-wide profile with a local budget; so social media was the chosen route as it was a surging force on the internet with MySpace, FaceBook, YouTube and Twitter becoming the fastest growing web sites for users and traffic.

The Research: Viral was the route and social media the opportunity for little actual/additional cost (other than time). So I analysed what made a successful viral campaign and quickly came to the conclusion that sex, humour or interactive sells but for obvious reasons some of these were inappropriate mediums for our target audience and corporate sponsors; I’m not a comedian and lots of the successful viral humour is sex related or slapstick (or people genuinely injuring themselves), so those were also discounted as inappropriate campaign mediums; so I needed to create a campaign that allowed the public to get involved enough that they would want to send it to their friends to participate in also, hopefully with a bit of humour, slapstick and titillation at an acceptable level. This became the recipe for viral success.

The Examples: Warwick Castle had developed a really entertaining video campaign to promote their up and coming Dungeon experience; GoLakes had an entertaining video of a person in a giant squirrel suit rapping a Wordsworth poem in the Lake District; however all of these seemed unsuitable for the Shakespeare Country brand; I then discovered a NetFlights campaign which was a luggage throwing game, simple, addictively entertaining, it sold destinations as part of the gaming environment and it was suitably engaging enough for me to want to tell my colleagues and friends as well as being fun.

The Concept:Create a simple game that anyone regardless of gaming aptitude could play, in an environment that emulated the destination, balancing the promotional advertising element of the campaign with the entertaining fun element of the game. I also wanted the destination to be represented in a warm light, literally, the sun always shining, the grass always green and the birds always tweeting.

The Game: Romeo has to negotiate the level to get to Juliet and find Roses, Hearts and the Bard’s plays on the way for points and/or to complete the level all set in Shakespeare Country.

The Stages: Shakespeare’s Birthplace, the Church where he is buried and the Theatre where his plays are still performed and all the other Shakespeare related properties.

The Foreground: Platform based game area, similar to the Super Mario games from Nintendo – three functions only; forward, back and jump.

The Results: Over 24,000,000 (twenty four million) plays in under a year; Over 180,000 (one hundred and eighty thousand) e-mail addresses added to our consumer database; More than 200,000 (two hundred thousand) additional unique visitors to the Shakespeare Country web site each month every month with over 500,000 (five hundred thousand) additional unique visitors in its first full month after launch and as the game is fully viral, at the last count it was also being featured promoted on over a 1,200 (one thousand two hundred) other web sites.

The End: The game saw the largest increases in numbers when we promoted it and it was subsequently circulated on Twitter and FaceBook by our/my followers and friends, but to be honest it did better than we ever imagined it would, hopefully you can repeat, replicate or ask me to help you.