Okay, so I went to London for the weekend and I was going to tell you all about it, which I will do but the theme that came to the fore whilst I was enjoying the Capital (with a capital E), was the level (or lack of) customer service I received.

Every element of customer service mentioned will be given a point rating (out of 10) and a customer satisfaction score for London will be totalled at the end.

I was travelling down to meet up with friends of mine (Jonathan & Jackie from Anglotopia) who happened to be visiting the UK for the week and we had arranged to meet up in Covent Garden for something to eat. Whilst organising this cross Atlantic get-together another friend of mine said that we could be put on the guest list for his band’s gig (Rollo Markee & the Tailshakers) at a little Blues Bar in the centre of Soho, so I booked a hotel through LastMinute (8 on-line) and invited some lovely company to join me for a night on the town.

Due to time constraints I decided to drive the 90 mile journey and pre-booked a car park space via Park-Here in Swiss Cottage (secure, underground and cheap) to avoid any congestion charges (8 on-line) and then we got the tube to Covent Garden, although buying a ticket was not simple, the machine would not accept my £10 note on more than one occasion, so we ended up having to buy a ticket from a surly member of the London Underground staff (2 on-line / 1 Ticket Booth Lady). 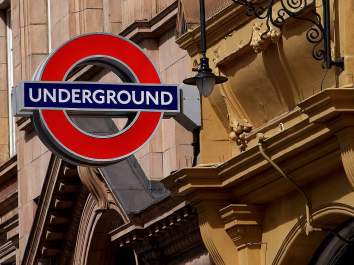 We decided to have dinner in Maxwell’s Bar & Grill which was okay, the food was fine, the drinks were okay, the company excellent but the customer service was at opposite extremes of poor (Maitre’ d 2 / Waitress 5), we then headed on foot through the West End to see the band play.

It was so hot, so humid and the congestion hung heavy with hoards of smokers crowding the streets. Maybe it was because it was so hot, maybe it was the smoking ban, because the pubs and bars were empty and the pavements outside them were heaving! After about fifteen minutes of meandering through the crowds we stopped in a lovely little pub called The Marquis, for a couple of refreshers; a Gin & Tonic and a Pimms and Lemonade, perfect drinks for a British summer (9 barmaid) and stood outside in the alleyway at the back to imbibe our liquid recuperation, it was a tale of two alleys; half of it was sophisticated, with pot plants, benches populated with people from the bar using it to smoke or to cool down in the breeze that was blowing through what must be a medieval throw back, as it is still a public thoroughfare (at this end it is three or four persons wide at the other end it is only one person wide) and at the thinner end it was a series of unofficial public urinals and darkened doorways for the homeless and vagrants to sleep in. : (

Eventually we ended up at the Blues Bar ‘Ain’t Nothing But…’ which is reputed to be the best this side of the Atlantic as well as the oldest in London, it is tucked in-between Regent Street (staff entrance for Hamley’s) and Carnaby Street and looked quite an interesting little place, free entry before 9pm but charging after as they have live acts almost every night of the week. Unfortunately the manager stopped us at the door and said that the band had not left a guest list and that ‘it was his bar and he decided who got in for free’ and started getting a bit shitty with us (Manager -1), my mates band had started playing (we could see him on the big screen projection outside the venue) so we sadly decided to go and spend our money elsewhere, hopefully where it would be appreciated.

Fed up with walking we hailed a cab, a traditional black London Taxi, driven by a lovely cabbie, great smile, really friendly and he even apologised when he found out the reason why we were leaving the West End (Taxi Driver 10) and he took us to the door of our Hotel on the South Bankside of the River Thames (Concierge 6).

We checked in quickly and then nipped over the road to a lovely little cocktail bar called The Refinery (Barman 8 ) that also happened to be a location for the Great British Summer promotion with a hundred deck chairs laid out and a huge outdoor screen showing Sherlock Holmes for free. The staff and the customers were lovely, great atmosphere and we spent a lot of money (please take note Manager of the Ain’t Nothing But…) on cocktails (Black Russians and Long Island Ice Tea’s) and stayed there until closing time.

Next morning we left the hotel (Staff 3 – they delivered my morning paper to the room next door?) and went and got breakfast at a lovely deli called Del’Aziz (Waitress 9) that made the nicest mint tea and really gorgeous food (the cakes and breads looked amazing). Then off to Tate Modernfor a bit of culture (which was lovely) before heading back home (Tate Modern 1 – loads of staff but they had no interaction with us at all, ever!!).

I had a really good time in London regardless of the disparity of customer service received, the good far outweighed the bad in my memory and I spent some quality time with some lovely people, shame I missed Rollo Markee & the Tailshakers, as Rollo is an excellent harmonica player, singer, and the band put on a great show, well worth seeing if you ever get the chance.

2 Responses to Customer Service in London