Originally an article for Anglotopia

Londonderry is going to be the first ever UK City of Culture in 2013 and the residents of this fair city have been celebrating ever since it was announced last week.

Londonderry (locally referred to as Derry) fought off stiff competition from England’s second city Birmingham, the lovely historic Norwich (see my Norwich City of Culture post) and Sheffield a South Yorkshire city that has regenerated itself since its heyday as a world renowned industrial giant.

Londonderry has been on the world’s maps since St Columb founded his monastery there but the most striking feature is the surviving mediaeval town wall which is the most intact and impressive town wall in Europe and the only one remaining intact in the UK. From the vantage of the wall walk which ranges in height from twelve feet to a towering thirty five feet in places, you can see views across the historic town which has the same street plan since the renaissance, the defensive walls have never been breached and withstood a number of sieges including one which lasted 105 days in the 1600’s, hence the town’s other nickname, the ‘Maiden City’.

The city gates are always open now and welcome a couple of million visitors each year, hosting a number of international festivals (see Derry Festival Listings) and there will be celebrations galore in 2013 so book your visits early; the Halloween festival in October is one not to be missed with tens of thousands of people involved, dressed for the part to spook the town and then there is the Amelia Earhart festival which is a variety event for all the family which celebrates the famous Aviatrix’s Trans-Atlantic flight which was supposed to have ended in Paris but due to bad weather conditions and instrumentation issues, she landed in Derry instead making her the first woman to fly across the Atlantic single-handed. 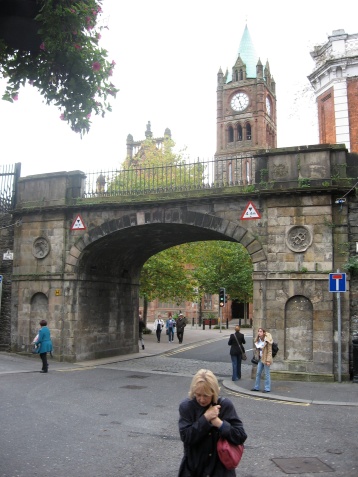 There are many places of interest to visit but a significant recent addition is the Peace Fountain in Coleraine’s park, constructed by voluntary contribution and using donated materials, the Peace fountain was presented as a gift in 2002 from the USA to the people of Londonderry, to represent the city as a phoenix rising from the ashes. The fountain incorporates the Giant’s Causeway, Northern Ireland’s most significant natural landmark and is made from thousands of guns which were melted down, with some of these firearms outlines still visible in the sculpture. Groups, businesses and individuals from across America including Florida, Georgia, Arizona, New York, Washington DC, and Massachusetts raised over $350,000 for the construction of the fountain. Click to see complete list of contributors

Other sites to see whilst visiting the city include the St Columb’s Cathedral, Saint Augustine’s Church, Apprentice Boys of Derry Association & Memorial Hall and dozens of museums and galleries depicting the city’s past and its influence on the arts.

As well as being a gorgeous historical city it is in a stunning natural location, sitting either side of the River Foyle (East of the river is known as Waterside and West is known as Cityside) nestled amongst the Sperrin Mountains, Lough Foyle and the stunning Inishowen Peninsula with the Giant’s Causeway and Glenveagh National Park nearby it is a great base to explore this most westerly part of the UK.

Visit the Derry Visitor web site or the Heritage Trail web site to find out more about this wonderful walled city and surrounding landmarks.