From the Anglotopia Archives:

I undertook something called the Yorkshire Three Peaks Challenge last weekend (well it was actually the weekend before but it has taken this long to fully recover) and it was both a satisfying and a grueling activity.

The challenge  involves walking about 25 miles through the North Yorkshire Dales including climbing to the peaks of three mountains in under twelve hours.

It was also a tweet-up organised by the lovely BaldHiker @Paul_Steele but unfortunately a few people couldn’t make it and couple of people fell ill before we had even started, so it ended up being just me and (a person who will forever be in my debt) Dave @PSBrushes walking it together.

We were also raising money for charity at the same time and I would encourage you (if you haven’t already done so to donate to Cancer Research UK by clicking this link.

It was a very early start and as I was travelling to Yorkshire from the Heart of England, so I decided to stay in the Crown Inn Hotel in Horton-in-Ribblesdale the night before. The Crown is a very nice pub, serving great food and a good range of regional ales, the accommodation is quite basic but so was the price and the hospitality was fantastic. The staff on more than one occasion had a friendly chat with me (I was by myself with just a book for company); Where had I traveled from? Was I doing the Three Peak Challenge? Did I want another drink? They also left me alone when I was entranced in my book (The Mobile Library, The Case of the Missing Books by Ian Sansom), it was a near perfect balance but the best bit of all was when they asked me what time I wanted breakfast!

I said it was okay as I was setting off out at about 5:30am for an early start so it didn’t matter, and they said, don’t worry, we will leave the kitchen open for you and if you come with me now, I’ll show you where everything is and then you can help yourself.

Ribble Head Viaduct with Whernside in the background (copyright PSBrushes)

I was so pleased, very impressed and extremely grateful, only a few hours later at 5am, in the pitch darkness of night, I was making a slice of toast, a cup of coffee and drinking some freshly squeezed orange juice in the pubs kitchen. Brilliant, a great start to the day and an example of simple but outstanding customer service!!

Well, I tend to be squeezing so much into life that sometimes the planning for extra curricular activities is pretty limited, so much so that as I set off on the three-hour drive to Yorkshire I realised that I had left my book at home, which at first I thought, oh well, I’ll just get by without anything to read, when I suddenly I remembered that my book was sat on top of my walking trousers on my bed at home, so I had to turn around before I’d even got started or I’d have to have undertaken the challenge half naked!

However it wasn’t until I was getting ready to meet up with the rest of my twitter friends in the village that I remembered I had also forgotten my head torch and my walking stick, ho-hum, off we go…nearly missed everyone though, it was that dark.

Dave lent me a hand torch as we headed out of the village and started the climb up Pen-y-ghent (694 metres – 2,276 feet), the sky was clear and the stars were bright and beautiful and as we climbed you could see the sunrise starting to peep over the horizon, the views and the sunrise were really beautiful.

Dawn from the top of Pen-y-ghent (copyright PSBrushes)

Fortunately the notorious peat bogs (which have been known to suck a boot off or two and attempt to remove your socks too, given half the chance) were all pretty much frozen solid, so we were able to make pretty good time, stopping only for an occasional snack and to take on some water.

One of the unusual things about the Yorkshire Three Peaks Challenge is that despite how popular it is it is not recognised as an official footpath, there are very few if any waymarkers, and as the sun rose, we had to make a little detour across the coarse grassy peat bogs on the downside of Pen-y-ghent to get ourselves back on course.

The next mountain to climb was way off in the distant morning mist, but in pretty much no time at all we were at the Ribble Head Viaduct, halfway between Pen-y-Ghent and Whernside (736 metres – 2,415 feet), we stopped briefly at the mobile cafe van for a much-needed coffee before we set off for peak number two.

It was on the way up Whernside, which is a long and gradual incline, that I started to get some issues with my right knee but Dave suggested that we stop at the cafe which is at the bottom of the downside for what he described as an infamous bacon sandwich, which spurred me on, mmmmm bacon!

I don’t think either of us were quite prepared for the amount of snow on top of Whernside, it had not snowed for quite some time at ‘ground level’ but clearly it had snowed more than once recently at the top and there were steps chopped into the snow drifts to make the final ascent onto the long plateau at its peak. 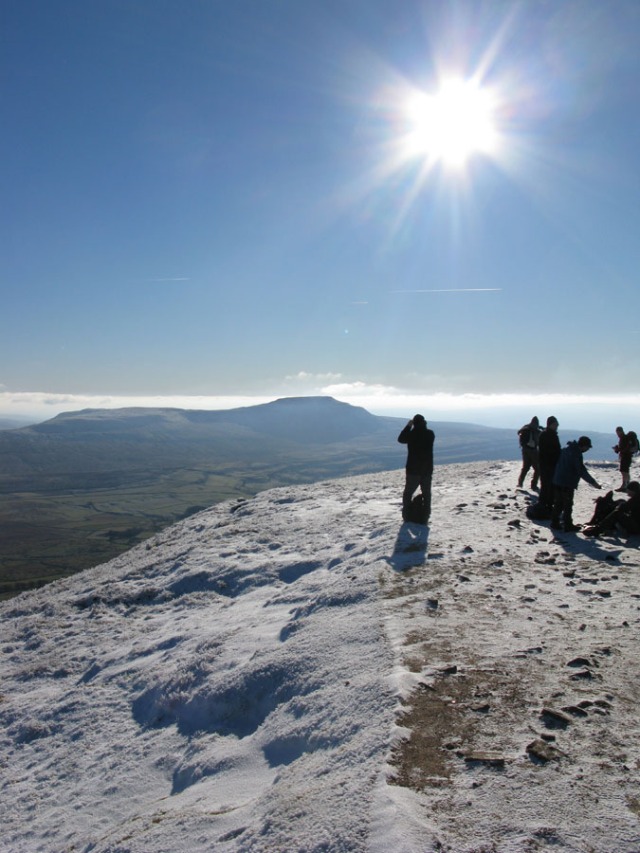 Top of Whernside with Ingleborough in the background (copyright PSBrushes)

So we began our decent with thoughts of sizzling bacon in our minds and we needed that positive thinking as it was really tough going, probably the hardest bit of the walk so far, the mid-day sun had melted the snow, the frost and the ground, making it a slippery, muddy, steep and rocky decent and by the time we got to the bottom, it was my knees that were sizzling out-loud and not the sound of bacon that we could hear.

This was a terrible but unforseen portent, the cafe is about another mile or so after this gruelling decent and as we approached it my knees had just about returned to normal body temperature when we saw something that made our hearts drop and my morale was almost completely broken. The cafe was closed until the 26th of March. No bacon sandwich, no hot coffee, no, no, no, noooooooooo!

I have to be honest, I’d had enough at this point, there was a nice looking pub ahead, who were serving possibly the best cooked meals I would have ever tasted, the clouds were rolling in fast and even though it was only 2pm it was getting darker by the moment – I was ready to phone a taxi company and ask them to pick me up from the Old Hill Inn near Chapel-le-Dale in about an hour (about as long as I estimate it would take to order and eat a steak dinner washed down with a pint of Black Sheep Ale).

But my dear friend and now suffering walking companion encouraged, cajoled and endured my dissatisfaction with the situation and before I knew what I was agreeing to we had agreed to get a move on up peak three and ensure that we were heading down the other side of Ingleborough before it got dark.

Now if I thought my right knee was giving me problems earlier, it complained louder than any whingeing I had done earlier after the realisation that I was not going to get a bacon sandwich, it was burning hotter than any sizzling frying pan that would have cooked the bacon for my missing bacon sandwich, I think you can see how much the closed cafe had affected me and subsequently I was now struggling physically as well as mentally.

Ingleborough (723 metres  2,372 feet) is a very steep and relentless up hill winding stepping-stone path, in some  parts the stepping-stones are on end as the path is too steep for them to be laid flat. I had to rest every ten or so steps for about ten or so seconds and adapted my walking stance to deal with the fact that my right knee was just unable to perform the task without support from the surrounding back and stomach muscles, it was hard going and I was overtaken by a number of other walkers on the way up.

But getting to the top of the third peak is where I was heading and with Dave’s encouragement and support it was done. Now only five miles or so of decent and I’d be back in the pub : (

Dave aka @PSBrushes tweeting at the top of Ingleborough

As we began the decent so did the sun and we were very quickly plunged back into darkness, it was awesome seeing the dew point freeze around us and frost was forming on the grass as we walked through it. We were joined by a couple of fellow walkers and whilst we were all remembering the walk and some of the amazing sights we had seen (fantastic icicles and frozen water patterns as well as stunning views as far as the eye could see) we realised we were lost, we had somehow managed to lose the path (which isn’t really marked) in the darkness.

So we rested next to a farm road that dissected our route across the Dales; we could see the lights of the Train Station in Horton-in-Ribblesdale ahead but none of us fancied climbing the dry stone wall that barred our way, so I switched on my phone and fired up my Google Maps App with GPRS and in no time at all we not only knew which way to go we also knew that we were only a few hundred yards from the finish point : )

Me aka @xwidep on top of Whernside, at least I remembered my sunglasses!

Dave drove off into the night heading home for a well deserved rest, I drew myself a steaming hot bath, ordered that steak dinner I had been longing for, downed a pint of the lovely Black Sheep and went to bed as soon as I could. In the morning it had snowed all over the Ribble Valley and Horton-in-Ribblesdale looked lovely, I bumped into many people who I had seen the day before at some point along the challenge and there was a great camaraderie, a spirit of shared adventure or maybe it was what I have termed the ‘3 Peaks Shuffle’ that united us all? I am sure you can imagine the stiff walking stance everyone had, the small grimaces required to walk up the stairs or get out of your seat, that is the 3 Peaks Shuffle!

Either way it was lovely to be waved off by friendly faces as I began the drive home.

For more information about the challenge and/or the Yorkshire Dales click the image above and if I haven’t already encouraged you, there is still time to make a donation to Cancer Research UK by clicking this link.

And that, dear readers, is one less thing to be ticked off my Bucket List!