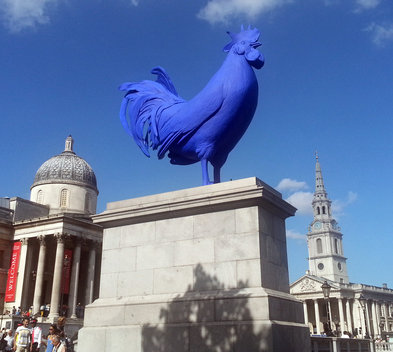 Hahn/Cock is a sculpture of a giant blue cockerel by the German artist Katharina Fritsch that currently occupies the fourth plinth at Trafalgar Square.

It is a gleeful feminist sculpture, poking amiable fun at the vainglorious monuments of DWM (dead white men; like Lord Nelson, George IV, and Generals Havelock and Napier) that surround it in this most imperial and public of British spaces. “Humour is always a big thing for me. It stops things from becoming too severe. I like English humour as it is so often very dark.” (Fritsch, 2013)

The Thorney Island Society, a local conservation group, objected to the sculpture on the grounds that it was “unrelated to the context of Trafalgar Square and adds nothing to it but a feeble distraction”, but The Guardian’s chief arts writer pointed out that Fritsch’s other works have a habit of appearing fanciful, dramatic and unrelated to their contexts “one should not overthink it. It’s a big, blue, funny, weird, surreal bird in Trafalgar Square. It’s going to cheer us all up. Katharina’s Cock, as I like to think of it, should be a hit.” (Higgins, 2013)

Katharina’s Cock captures popular imagination and public support because of its immediate appeal and joyful snub at the masculine environment in the square whilst also becoming a focal point for discussions about the place of contemporary art in public spaces, making it relational and participatory, it is both monumental and un-monumental, it is a site specific piece and yet is also non site specific.

The fourth plinth, is in the square’s north-west corner of Trafalgar Square. Built in 1841, it was designed to hold an equestrian statue – like its twin, in the northeast corner that depicts George IV but funds ran out and it remained empty until in 1998 the first in a series of temporary sculptures for the plinth were commissioned. Works by Rachel Whiteread, Yinka Shonibare, Mark Wallinger and Antony Gormley are among those to have occupied the space previously.

Hahn/Cock, which was selected by the Fourth Plinth Commissioning Group (a body that includes artists Grayson Perry and Jeremy Deller), occupies Trafalgar Square for 18 months.